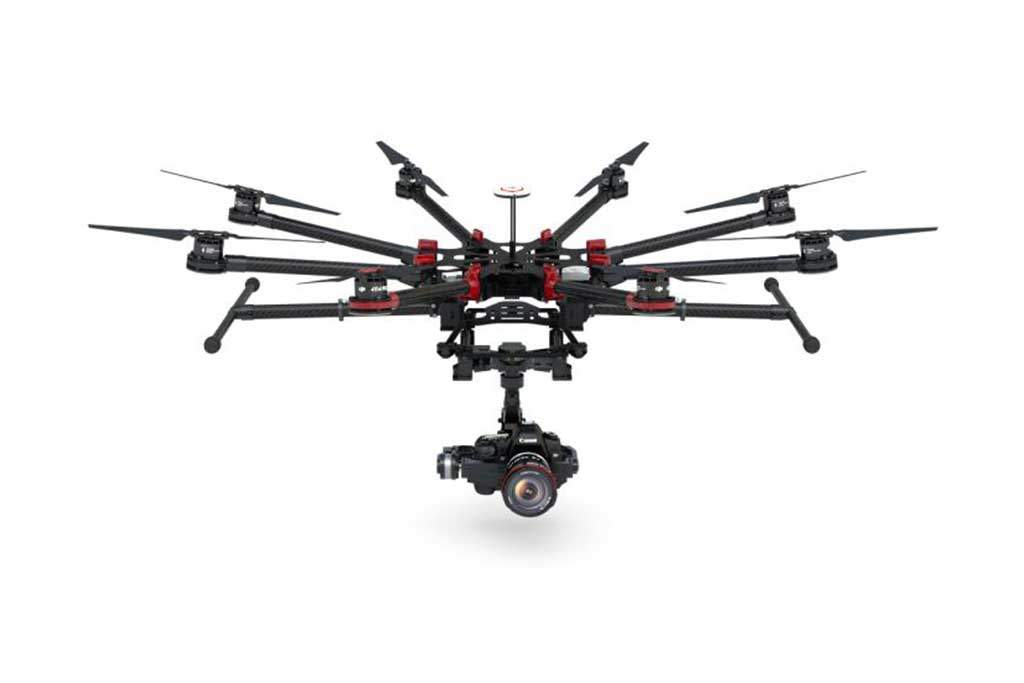 Octocopter isn’t the name of a bad-ass transformer, but it’s not far off. Octocopters are UAV drones with 8 rotors. Octocopters are the most expensive and the largest machine in the categories of drones.

Their main difference between them and quadcopters is their ability to carry a heavy payload. A payload is the extra weight a UAV or drone can carry, it doesn’t include the weight of the aircraft. A common payload on a drone is adding a gimbal and a camera to the drone. There are consumer-level heavy lift drones that can carry a payload of over 40 pounds.

GoPro drones are great for carrying cameras, but some jobs require a much bigger camera, which means a stronger drone is needed.

Most consumers are buying drones and quadcopters and don’t need the necessity of carrying extra payload. So, why are octocopters popular on the market and why are they important? We review the many different areas octocopters are used and how they could be improving our world.

Octocopters find themselves a part of research in many fields, and a main one is agriculture research. Drones help take the burden off manual labor; they can scope and record areas of land in minutes from an aerial perspective, where using humans takes a long time and they can’t see from the same perspective.

Rothamsted Research is a non-profit research center to help improve and benefit agriculture world-wide. They conduct experiments on over 200 hectares of land. They fly an octocopter over the crops to record data. By using octocopters, it becomes a very accurate procedure and it saves them a lot of time. The octocopter records crop height and maturity. Rothamsted researches attach whatever equipment they need to the octocopter, like special cameras that have advanced image processing software to accurately collect information from the crops.

An octocopter is ideal for this kind of project, rather than a quadcopter, because it can carry multiple cameras. The flight is extremely stable, which is important for gathering accurate data.

Octocopters other uses in agriculture have been to track irrigation and droughts. They help farmers track where the water is going and how much is being used in their crops. The stability of the octocopter allows it to hover smoothly over exact points.

Professionals use octocopters for scoping out land in other ways, like for land surveying. Again, using a drone instead of a person to map out miles and miles of land drastically reduces the time it takes to collect data. It also gives a better view of the land since it is seen from above, so, researches can focus their time and attention on the data collected while the drone does all of the labor work. Using an octocopter also means taking more risks when exploring land. You can put it in more dangerous situations than you can put a human in.

Why is this important? It shows that drones are keeping up with today’s demands of very quick input and output of information.

Drones, specifically octocopters, play an important role in search and rescue (SAR) missions. They are the strongest kind of drones, they can carry a lot of extra weight, and they fly the most stable at the highest altitude.

Special cameras can attach to octocopters that perform specific functions for SAR. Cameras that take thousands of images per second and land surveying technology information are sent right away to the people on the ground looking for missing persons.

The octocopters can carry other payloads, like water and other survival tools, to the missing person. Sending a drone takes the danger of sending a person to search out of the equation.

Using an octocopter speeds up and makes the SAR more efficient and safer.

You can find octocopters in the world of conservation. They are extremely useful in helping animal and land conservationists do their job with even more power.

Octocopters track poachers hunting wildlife. Because of this, they are able to see them and catch them quicker than humans can. Conservationists use FPV and live feed to record poachers’ location so they can stop them quickly. They are also being used to catch people abusing hunting and fishing laws by overhunting.

Drones take images of animals that humans wouldn’t be able to take, helping conservationists keep track of endangered animals. For example, they can see if animals are malnourished, in danger, or if their numbers are growing.

Octocopters can get the literal big picture of how climate change is effecting the land. By having the perspective from above, and being able to carry multiple special cameras, scientists use octocopters to assist them in climate change research.

All these tasks can technically be done by drones that are not octocopters. But because of specific abilities of octocopters, they are able to complete these tasks with the most accuracy and efficiency.

Octocopters on the Market

Are we surprised DJI has their own octocopter? One of the most innovative drone manufacturers has done their research to produce this awesome octocopter.

The DJI Spreading Wings S1000 is extremely stable, and for 8 rotors, is easy to transport around. The 8 arms are foldable and the propellers tuck away. Reverse this process and you are all set up to fly within 5 minutes. It has a battery life of 15 minutes and can carry 7kg of payload (starting weight is 4kg). The gimbal mount position sits low, giving aerial images a clear, wide view.

9 Simple Steps When Buying a Drone