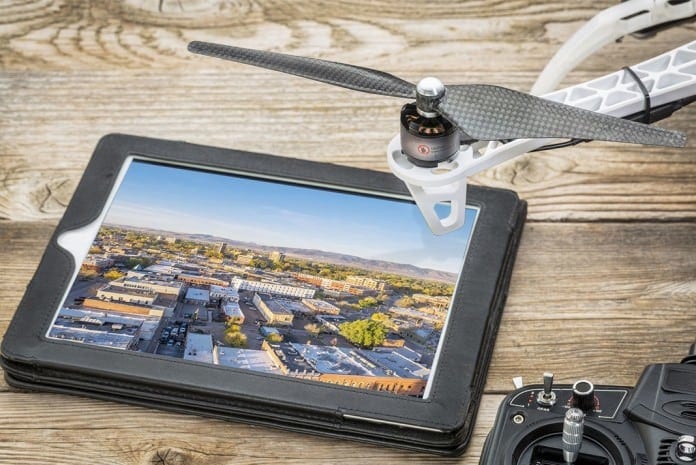 Aerial photography has changed dramatically over the last few years. Previously, this was the domain of experts who used expensive, heavy equipment. However, thanks to advances in technology, inexpensive drones are now easily affordable and more people than ever now own one.

While a drone is a fun remote-controlled toy for adults. There are also drones for kids and its potential in aerial photography and video is what is making it a must-have for many.

Camera Settings on your Drone for aerial photography

Before we start on the topic of editing pictures taken from drones, we need to understand what settings are best used for aerial photography.

Shutter Speed – The most important aspect of aerial photography is the camera’s shutter speed.

Focus Methods – All digital cameras have an auto focus (AF) system. For aerial photography, the best option is the Continuous AF mode.

White Balance – In your settings, you can change the light balance to give your photo different tints ranging from natural light to blue, orange, yellow, etc.

Stabilization/Vibration – Top drone manufacturers ensure that the camera on the drone comes with optimum stabilization for the best picture quality. Some of the best drones equipped with cameras are DJI, Walkera, 3DR, Aerialtronics, Yuneec, and Service-Drone.

Currently, DJI is the market leader and offers the best gimbals that stabilize the drone’s camera. The Inspire 2 is the favorite drone for professional photographers.

ISO for Aerial Shots – For aerial photography, since resolution is most important, it is best to use low ISO settings.

Aperture – For aerial photography, aperture needs to be set at maximum.

Most Common Used Software For Editing

Editing photographs brings out your unique vision of that particular picture. To make sure that you get the best results, you need to make sure you use the best software while editing pictures taken from drones.

All editing softwares will have the basic editing tools such as sharpening, brightness/darkness, contrast, saturation, cropping, resizing, etc. They will also have the option of non-destructive editing, meaning that the original file will be saved even if you edit it.

One of the most popular programs for editing aerial photos is the Adobe Lightroom. Adobe Lightroom has been created especially for serious photographers and has a lots of professional tools and features.

Here are a list of things you need to keep in mind while editing pictures taken from drones:

Cropping and Composition – There are two main composition layouts that are most utilized in photography – the Triangle and the Rule of Thirds.

In a Triangle composition, the focus objects in the picture are laid out in a triangular shape. This gives the photo great balance and is also pleasing to the eye.

In aerial photography, however, the Rule of Thirds is the one that is most often used. The picture is divided up like a tic-tac-toe board and the focus points should be placed at the intersections of the lines.

Removing Objects – One of the drawbacks of aerial photography is that there can be unwanted objects in your pictures. For example, the shadow of the drone itself could be captured in the picture. In Lightroom, or even Photoshop, you can remove these unwanted parts of the image using the “clone” tool. The “clone” tool basically copies pixels from one part of the picture and transplants it on top of another. So, the aforementioned drone’s shadow can be removed by simply taking the grass (for example) from the surrounding area and placing it on top of the drone’s image to remove it.

Color Correction – All editing tools will give you a huge bunch of options to correct the color in your picture. Colors are controlled by the amount of light, what we may have seen while taking the picture might not be what came out in the picture. Using the saturation tool can dramatically change how the picture looks.

The “Golden Hour” Effect – The best time to take pictures are during the “Golden Hour”, which an hour after sunrise or an hour before sunset. The light at this time is dramatic and rich and shadows longer. Using the Golden Hour effect during editing will give you this effect for any picture. The best Golden Hour tool is available on Luminar.

Contrast & Haze – In aerial photography, the atmosphere between the camera and the object being photographed is also captured, which has – a lot of times – an undesirable effect. Playing around with the contrast tool will help sharpen your pictures and take away the unwanted haze effect.

Noise Reduction – When using drones for low-light or night-time aerial photography, one of the biggest problems is “noise”. Noise is the term used to describe the visual distortion of a photo – it looks like old film grain. The graininess of the image can ruin the picture. You can use the Luminance option in your editing software to reduce the problem.

Blurring – Blurring happens when the camera’s shutter is open and the object moves. While sometimes blurring is an attractive effect in the photo – like when trying to show motion – most of them time, it just simply ruins the picture. While too much blurring can’t be fixed, small bits of blur in the image can be fixed using the “sharpness” tool.

This is just an overview of how you can play around with editing your aerial photographs. The more you practice with your camera settings as well as your editing software, the more adept you will become and producing quality aerial shots using your drone.

You might also want to check out our guide about common mistakes when making an aerial film.