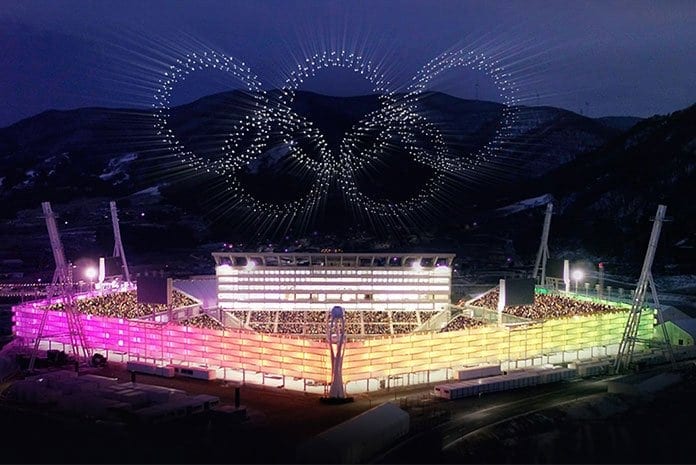 Drones have been used for many purposes such as for military, government, medical, and personal purposes. Drones have also been used for years in broadcasting sports. In the recent years, they have been used for surveillance and also to come up with a good show for the opening ceremony of the Olympics. Olympic drones are unmanned aerial vehicles that are flown and controlled through a computer airborne simultaneously.

Olympic drones were introduced by Intel in 2016 when 500 unmanned aerial vehicles were flown simultaneously into air in Germany. Intel has outdone the previous record in the recently held Winter Olympics at Pyeong Chang in South Korea flying over 1,200 drones into air. Olympic drones are used for the purpose of entertaining people during the Olympic opening ceremony, creating a magical illumination and forming different shapes and animation in the air. The Olympic drones since then have been used not just during the opening ceremony but they also appeared regularly throughout the Games during the awarding ceremonies.

Aside from the Olympic opening ceremony drones, surveillance drones are also used during the Olympics. They are deployed in the locations where the Olympic games and events are to be held to scan and survey both the ground and the sky for any suspicious activity. The Olympic Village is a no-fly zone during this time so other drones are not allowed to be flown in the area during this time. If these surveillance drones spot unauthorized drones, these unauthorized drones can be captured by interceptor drones which can capture intruders using nets.

Intel uses Shooting Star drones that are purposefully built and created for entertainment. These Olympic opening ceremony drones are controlled by just one pilot and a single computer which is a breakthrough in technology and which set a record in the Guinness World of Records for “most unmanned aerial vehicles airborne simultaneously”. The drones are quadcopters that are made up of polymer foams and flexible plastics and that weigh 330 grams which is about the same weight of a volleyball. They feature LED lights that are built-in and that can create color and brightness combinations of more than four billion. These LED lights can be easily programmed to create different kinds of animation.

Each drone also contains an onboard barometer and a GPS in order to monitor weather conditions and also to navigate the sky. The maximum range for the drone movement is 1. Kilometers with a maximum tolerable wind speed of 10 meters per second. The duration of the show is estimated to be between 5 to 8 minutes. Their movements and the changing of colors are synchronized to form different images in the sky. To create a dramatic performance, the drones are illuminated and they fly in perfect formation to form images that are significant for the Olympics just like in the recently held Winter Olympics where they formed floating images of the logo of the Olympics, a skier, and a snowboarder. This is all controlled by just one person and a computer.

The Shooting Star drone system uses a software and an animation interface that can be built in a matter of days or weeks which depends on the complexity of the animation. The creation of animation is automated by an algorithm that uses a reference image, calculates the exact number of drones that will be needed, determining the area where the drones should be set, and mapping out the fastest path in order to produce the image in the sky.

The Olympic ceremony drones also use a light show control software to run a complete check of all the drones before they fly. With the help of the cross check, the software can easily choose the drones that have the best quality taking into factor the GPS reception, the battery life, and a whole lot more.

Intel has a running contract with the Olympics until 2024. They have more plans for the Shooting Star drone in the future Olympics which include flying drones during the Olympic games to help give a virtual reality view of different sports and also using sensor-bearing drones to measure the performances of the athletes.

5G technology was used for the Olympic opening ceremony drones. It enabled the showcasing of real-world demos, an interactive HD-video streaming, a live cross-country event viewing in the mountains, and a whole lot more. Intel is the first company to use 5G technology to make things smarter and more connected in the quickest and most efficient way. 5G is a network of various wireless technologies that is mixed with intelligent edge services and a virtualized core.

The 5G technology used for the Olympic drones can be used for other purposes of drones such as for monitoring traffic on the road, for monitoring traffic inside the airport, to be used as an alternative for fireworks during special occasions, and a whole lot more. In this way, accidents and injuries can be avoided with the quick response of the drones. Just imagine using drones for special occasions like celebrating big holidays. Fireworks are prohibited in many places and the use of it is limited in some places because of the danger that it inhibits on users. For a much more safe yet enjoyable way of celebrating big holidays, flying drones forming different images in the sky would be a great alternative.

According to Intel, the technology that was used for the Shooting Star drones used for the Olympic opening ceremony can also be applied in other areas. They used fleet management technology for these Olympic drones which they are now developing and testing to be able to use it for search and rescue operations and for drone inspections. At present, only a single drone is used for drone inspections when used for commercial purposes. These drones fly for different missions which take a lot of time and which could also wear out the drones easily. With the help of fleet management technology, instead of using a single drone to do the inspection, the companies can use multiple drones to perform a mission. This would significantly increase the inspection time and be more valuable for search and rescue operations because of its efficiency.