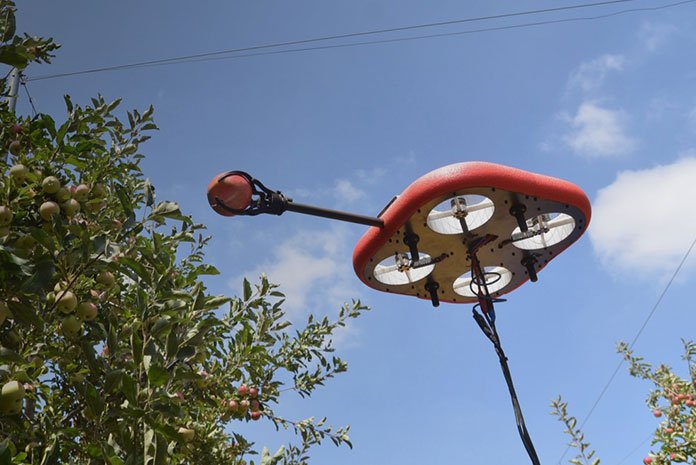 Fruit pickers cannot be everywhere at once. When there aren’t enough fruit pickers in the fields, it can lead to several problems for farms. Fruit often rot when left unattended, which brings their value down considerably. Even during peak season, if not enough fruit is picked, it cannot be sold at its highest value. Billions of dollars are lost to farmers each year. As a result, they look to technological advances to solve this problem.

Tevel introduces FAR, otherwise known as Flying Autonomous Robots. These specialty drones are designed to be fruit pickers. FAR can eliminate the process of manual labor. Harvesting can be on-demand with the touch of an app. Tevel states the human population is expected to grow by 40% in 2050, which means fruit production doubles. With the use of drone technology, Tevel provides farms with solutions to overcome the production increase. Flying Autonomous Robots can also be used for other purposes, such as planting tree drones, organ transport and much more.

How Does It Work?

FAR uses advanced AI through data analytics and algorithms. Tevel allows the farm to choose between apples, oranges, and avocados. They send a technician to deploy the drones. From there, they can track the progress of the drones through an app. An example is 50 FAR units within a turnaround of 70 days. It also gives an estimation of how much money the farm can make from the fruit picking. When multiple drones are deployed, they significantly increase the output of fruit picking for the harvest season.

The drones use AI perception to track specific fruits in the orchard. It can figure out the fruit’s classifications, which include its color, size, and ripeness. With trajectory planning and stabilization, the drone can pick up fruits with no problem. With the right amount of force, no damage is done to the fruit. Farms can also use fleet management based on available data for their orchard. It helps maximize the potential earnings of the fruit picking.

The biggest improvement farms can expect with FAR is the improvement in work productivity. Employment is an easy process, after which advanced AI allows them to pick several fruits within a short time period. Thanks to the visualization algorithm, it lets drones pick only freshly ripened fruits from the orchards. The more fruits picked, the more likely profitability increases as a result. It also reduces the risks of injuries to workers since fruit picking can be redundant for their hands and arms.

Drone technology allows more efficient methods of harvesting. Since the drones can fly within a far reach, it eliminates the need for humans to waste energy walking around all day. FAR also significantly reduces the likelihood fruits are left to rot. Since they can be picked up at a much faster rate, fruits can be sold at peak value during the harvest season. It benefits the human population with healthy fruits packed full of vitamins.

Tevel’s advanced technology is a cost-effective measure for farms and their families. The drones are low cost and maintain good harvests throughout the season. Farms no longer need to worry about the lack of fruit pickers on the field with FAR.

Do Drones Impact Employment of Farmers?

There are concerns over how human employment is affected by the usage of drones. Tevel reassures they are not looking to replace human fruit pickers. Rather, the drones are meant to assist them while they work. FAR’s cutting-edge technology ensures fruit pickers have an easier time reaching for every apple, orange, and avocado. If anything, drones are not particularly responsible for the lack of fruit pickers. It has more to do with a generational shift of younger people looking for urban jobs instead.

Fruit picking is a job gradually losing workers each generation. By 2050, agriculture employment is expected to be cut in half, meaning farms lose out on five million fruit pickers. The shortage of fruit pickers leads to 10% of fruits unharvested. However, FAR is intended to pick the fruit right on time to prevent any shortages. Deployment of these drones can compensate for fewer fruit pickers by supplying a spare hand. Those who already work in the industry can expect profitable results as more fruit tends to be picked with these drones.

FAR – The Future of Fruit Picking

Agricultural technology fast approaches harvesting season with the best results. Tevel offers an optimal solution to fruit picking with their FAR machinery. Farms lose out on billions of dollars when the fruit is left to rot, simply because there aren’t enough fruit pickers. These drones can help organize the difficult task of harvesting and prevent farmers from going out of business. With its far reach, FAR can pick up several fruits within a matter of days. Their advanced AI allows them to tell the difference between ripe and unripe fruits. With Tevel, the future of fruit picking is in good hands.