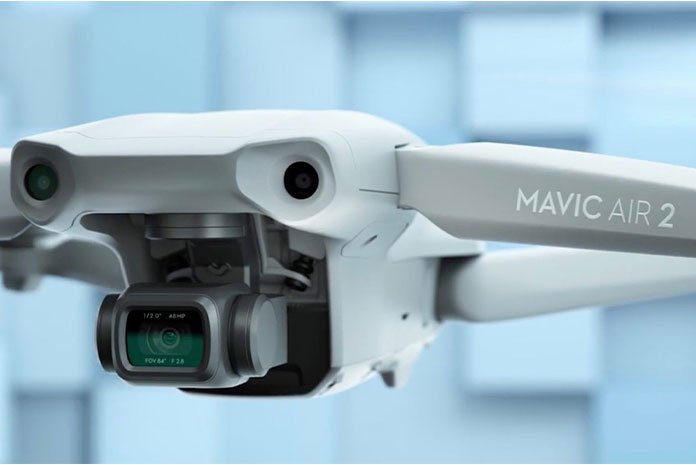 Flight time: Up to 35 minutes

Whenever you are looking for a particular gadget, there is always that model that seems to hit all the right notes for everyone. And when it comes to drones, that model is the DJI Mavic Air 2.

The heir to DJI’s Mavic Air which was released two years ago, the Mavic Air 2 takes its predecessor’s high marks and gives it a solid revamp. The resulting product is a more compact and affordable variant of the high-end Mavic 2 Pro that not just matches, but also bests its more expensive sibling in some areas.

But while a lot of drone enthusiasts and experts will claim that the Mavic Air 2 looks exactly like the previous iteration, don’t make the mistake of thinking it is just a mere clone. Believing so is an injustice to the fact that the Mavic Air 2 is the smartest drone in the market today.

For the Mavic Air 2, its designers emphasize usability and the result is seen on nearly all the elements of this particular product — starting from the drone to the app that you use to maneuver its flight and control its camera.

Akin to the previous models of DJI, the Mavic Air 2 can be bought in two different bundles. There is the standard package which has the Mavic Air 2 drone, a battery, a remote and all the essential cables and wires.

However, if you want to do longer shoots and need a way to carry the drone and all its bells and whistles around, you would do well to pick up what DJI is calling the “Fly More” bundle. In it are the same goodies as the standard package but adds a shoulder bag, ND filters, a charging dock and two batteries.

As previously mentioned, the Mavic Air 2 looks like a shrunken Mavic 2 Pro as it has a similar folding design that has the front arms out and the rear rotating down and out during flight. It measures 180 x 97 x 84 millimeters (mm) when it is folded and 183 x 253 x 77mm when it unfurled.

It weighs just 570 grams — half the weight of the Mavic 2 Pro — which means you will be getting a portable and remarkable drone that will do wonders for both photographers, videographers and content makers alike.

Bear in mind though that in adapting the folding design of its predecessor, the Mavic Air 2 sits very low to the ground, leaning on its rear arms. This position means that when you are having it take off in areas where there is a lot of grass around, it is strongly recommended that you find an area where the grass is short so that it can avoid the tall grass when taking off or landing. This is an important tip as it can help you avoid uneven flights and in worst-case scenarios, even crashes.

The Mavic Air 2’s controller on the other hand, takes a different route. It is now larger and does not have a folding design. Think of it as a miniature version of the DJI Smart Controller sans without a screen. This new controller though, is a lot more comfortable and lightweight, thanks to the contoured grips and its 393-gram weight. Also, the controller also syncs with the drone a lot faster than the previous version.

The controls offer nothing out of the ordinary as the designers leaned towards a minimal layout that leaves most of the camera control to the DJI Fly app on either your smartphone or tablet.

The Mavic Air 2 sports a lot of novel mechanisms such as a new motor, speed controller, better battery efficiency and augmented aerodynamics. All these elements come together to give you flight speeds that go up t 42-miles per hour when in Sport Mode and longer flight time that reaches as long as 34 minutes.

This far longer than the mere 21-minute flight time of the original Mavic Air and three more minutes longer than the Mavic 2. While that may not sound like it’s a lot, you will really see the difference in the increased flight time and better battery efficiency.

When it comes to flying the Mavic Air 2, you won’t encounter any difficulties, thanks to its smart technology, highlighted by the OcuSync 2.0 which is an exceptional means of transmission between the drone and the controller compared to the one that was utilized by the very first Mavic Air.

This is not to say that all is dandy with the Mavic Air 2 as despite having all these new bells and whistles that help keep the drone and the controller connected from as far as 10-kilometers, the video feed still sputters and even locks up at times while the drone is in flight.

When it comes to safety features, the Mavic Air 2 has obstacle sensors found at the front and the rear parts of the drone. These are already turned on by default and it is recommended that you keep it that way to ensure that your drone does not meet an untimely demise. Another nifty safety feature is geofencing, which basically keeps the drone from flying into restricted airspace such as airports and other critical facilities.

Another one is the Advanced Pilot Assistance System 3.0 that will essentially reroute the drone in the event there are obstacles in its path. And finally, the Mavic Air 2 also introduces AirSense, which utilizes ADS-B aviation technology to get signals from airplanes and helicopters that are within proximity and shows their location on the map found on the Fly app. This is a useful feature as it helps lessens the chances of an air collision.

When it comes to image quality, you’ll find that the Mavic Air 2 comes with massive improvements over its predecessor. It sports a brand-new 12-megapixel 1/2–inch Quad Bayer sensor that will provide you with considerably sharper images no matter what the ISO level is.

Photographers will be pleased to learn that the Mavic Air 2 features functions that will make shooting a lot easier. HDR photos are produced using seven bracketed exposures that are combined to come up with a detailed image. Hyperlight will help you take photos in low-light conditions while Scene Recognition can instantly recognize five different kinds of scenes and alters the settings in the processing to suit each one.

And then, for videographers, the Mavic Air 2 brings to fore some firsts like the ability to shoot 4K video at 60-frames per second (fps) and slow-motion video of up to 240-fps at 1080p. You also get the choice of either capturing video in Standard or the D-Cinelike format which shows more detail even in shadows and needs some bit of color grading.

For many, the Mavic Mini was the peak of small drone innovation but clearly, DJI has completely shattered that mold with the introduction of the Mavic Air 2, which essentially takes all the best parts of the latter and the other two Mavic 2 variants.

The drone’s aesthetics saw some considerable changes, as did the connection between the controller and the drone itself. It also has much better battery life and efficiency and the ability to take 4K video at 60-fps, 48-megapixel stills images from the new 1/2-inch Quad Bayer sensor and a wide array of other nifty features that drone enthusiasts, both new and old, will come to appreciate.

To be fair, the Mavic Air 2 has its flaws but those are outweighed by the sheer pleasure and ease with which it can be used. We certainly won’t be surprised if it ends up becoming the most popular DJI product this year.