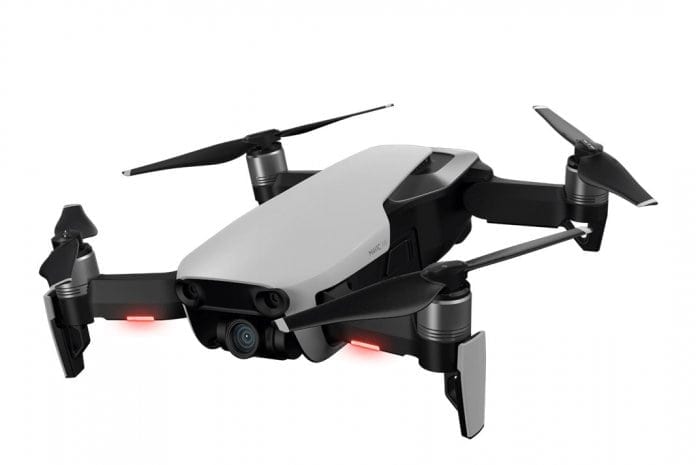 Photographers and videographers no longer have to worry about missing great aerial shots due to bulky camera drones that won’t fit into their bag. Meet DJI’s new multipurpose drone, DJI Mavic Air. Engadget described the drone as the next small thing in aerial photography and for many reasons.

The features and price range of the new DJI Mavic Air place the $799 quadcopter in between DJI’s consumer drones, the Mavic Pro and Spark.

In 2016, China-based technology company DJI unveiled its Mavic Pro. The price, features and cool-factor of the Mavic Pro made it a success. The company released the Spark in 2017. Spark is smaller than the Mavic Pro making it a more portable option but its size apparently comes with compromises. Spark is less powerful and does not have the basic features many aerial photographers want.

The limitations of its predecessors make the new DJI Mavic Air a good if not a better option for aerial photography enthusiasts.  It is small and portable as Spark but powerful enough to produce impressive videos and images.

The 15-ounce drone can be folded up, which is essentially useful for those who travel. Users can reduce its size down to just about 6.5 inches by 3.5 inches by 2 inches once the four arms are collapsed against the body. This is just about the size of a large phone. The thing is so small its box looks more like the packaging of premium smartphones.

The DJI Mavic Air isn’t the only small drone available in the market. There are other options out there but Mavic Air is a league of its own. Droneographers want quality footage but this gets compromised when equipment size is taken into consideration. Mavic Air offers a solution to this dilemma. The Mavic Air has features you would expect to get from its bigger and more powerful counterparts.

Cramming so much into little space though requires having to flip and twist the object to make it operational but even this justifies for the absence of the unnecessary bulk users would sometimes exchange for great aerial shots.

The drone has depth-sensing cameras: forward, down and a backward, to automatically prevent collisions in those directions. The rear collision guidance is a new feature. The older Mavic Pro only has front and bottom collision avoidance.

The sensors make flying the Mavic Air indoors relatively safe. The cameras underneath the drone also allow the Mavic Air to land within a few inches from where it took off.

Unlike the Mavic Pro whose remote control comes with a built-in screen, the new drone requires a mobile device for use as screen.

Air’s camera works best outdoors with ample natural sunlight. Shots taken during the day look sharp and rich but do not expect the same image output in high contrast scenes during sunrise.

The Mavic Air can capture beautiful 4k video.  Spark’s HD camera is good but it has issues with basic stabilization technology and limited choices for resolution settings. Mavic Air’s 3,840×2,160 video resolution is an upgrade from Sparks 1,920×1,080.

The latest drone has a bit rate of 100Mbps, which is higher than the Spark’s 24 Mbps. It also has HDR and more slow-motion effects. Users who have tested the new drone described the video taken by the Mavic Air as something that looks like it was taken from a tripod when the drone was in fact being buffeted by winds. The DJI Mavic Air can also take spherical 360 photos that can be displayed using the DJI Go app.

Mavic Air’s Color representation may not be at par with the Mavic Pro though. The new Mavic Air neither has a cinematic mode but regardless, the drone’s photos and videos are great especially when you consider its size.

Mavic Air has an automatic Return to Home feature that would kick in if the device loses signal with the remote control or when the battery is getting low.

The advertised maximum transmission distance with controller for the Mavic Air is 4 kilometers, which is twice that of the Spark. Mavic Pro’s range is at 7 kilometers.

Engadget’s James Trew, who tried to fly the Mavic Air as far away as he could but well within the recommended range, initially experienced glitches with the video feed but the issue cleared up after that. He also had one instance when the drone lost contact with the controller and began to fly home before it connected again. Trew said that the video feed and connection issues both happened only once.

The box includes the DJI Mavic Air drone, a remote control, battery, charger and propeller guards for indoor flying. It also comes with a spare set of propellers. The basic kit notably has only one battery but DJI offers a more expensive $999 option, which comes with two more batteries and other accessories not found in the standard kit.

DJI Mavic Air comes with an 8 GB internal storage for both video and stills. This means users can still record even if they do not have a micro SD. Both the Pro and Spark rely on a micro SD card.

The DJI Mavic Air retails at $799, and is around $200 cheaper than the more powerful and feature-packed Mavic Pro, which sells at $1,000. DJI Spark, on the other hand, is just about half of Mavic Air’s price so potential buyers of the Spark and Mavic Pro may inevitably consider the Mavic Air.

For those rooting for the $400 Spark, the price difference is significant but so is the upgrade. Users get 33 percent longer flight time with the Mavic Air and a range of other features such as more safety sensors and more auto shot modes. Besides its price, the other bestselling feature of the Spark is its size but the Mavic Air can fold down, which means it is arguably more portable.

For those eyeing for the Mavic Pro, the $200 savings you get with the Mavic Air comes with a few compromises. Professional photographers and videographers may still opt for the superior image and filming modes of the Mavic Pro but the limitations of the Mavic Air should not matter much for the casual users who just want to have a reliable and highly portable flying camera with efficient obstacle avoidance.

As Vjeran Pavic, of The Verge, said, DJI Mavic Air offers the best of what the Mavic Pro and the Spark can offer. The new drone has an improved camera inside a body smaller than those of the Pro and Spark.

While the Mavic Air won’t satisfy those who would use it for commercial work. Most consumers who are after portability, price and features would find it a drone to beat.

On a personal note, i would prefer a drone that has more flight time. I was surprised to see that the new Mavic Air has only 21 minutes of flight time. Even though i fly my Mavic Pro Platinum less than 30 minutes, i would still prefer to have a drone that can fly for a longer time.