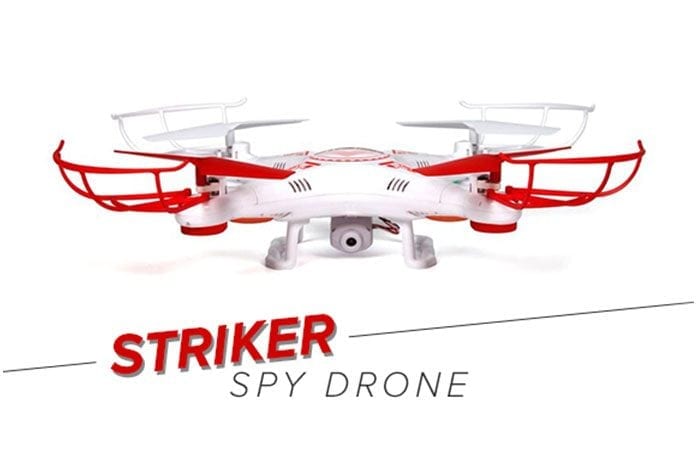 Are you looking for a cool birthday or Christmas gift for your kid? Or are you simply looking forward to giving yourself a nice present? Either way, the Striker Spy Drone can make all the difference. Its ability to glow in the dark will absolutely melt every person’s heart. What is even interesting is that this spy drone can be flown both indoors and outdoors. It is fully equipped with features that allow you to take photos, videos, and even sounds for a maximum distance of 50 meters. All of these enticing qualities for less than a hundred bucks.

Oh, in case you are wondering, this drone is not meant to spy on your neighbors. Doing so will only get you into trouble and, more importantly, will give a bad name to this wonderful hobby. So, before anything else, make sure you fly responsibly.

By essence, the Striker Spy Drone is a remote control toy drone. Not only does it has inbuilt video features, but it also comes with a meek photo camera. You can take either aerial photos or videos and, at the same time, store them on a memory card for later viewing. While there are other drones better equipped with a camera and video features, the quality it provides is perfect for its price. You will definitely enjoy the thrill of getting some cool flight footage from up above. The spy drone can be operated using two means: a remote control and an app.

The thing that makes this drone quite special is its glow in the dark feature. This capability allows you to extend your playtime to dusk and even night time. It is equipped with four LED lights for easy spotting in areas with low light. Built by World Tech Toys, the drone has obtained massive sales since inception.

The Striker Drone at a Glance

The drone, as already mentioned above, comes with a number of features. They are all specifically designed to satisfy the cravings of every drone enthusiast. Still, here are some cool features to really look forward to:

Not to sugar coat it, but the drone is absolutely awesome. You can buy it for about $55, which is not terribly expensive for a drone with lots of features. To ensure its strength, it is made of durable plastic and even has extra propellers. It also has propeller guards, though it would still be best to fly it carefully. That is because these guards do not necessarily make the drone invulnerable, especially when it hits something very hard.

The Striker Spy Drone is also ready-to-fly and has a simple battery charge. The only catch, though, is that most flights with this drone tend to last for about 4 minutes. While it can be quite hard to handle from little to strong winds, you can expect a pretty stable flight from this quadcopter. In addition, make sure you do not let it fly too high. Since it is quite light, it can easily be carried away by a strong gust.

As for its built-in camera, it arrives with a 2GB SD memory card. Sure, it is not the best camera out there, but the drone’s ability to allow you to watch a video of the flights is fascinating enough.

For starters, the package contains the drone itself. It has four spare propellers, rotor guards, a USB cable for charging, memory card adapter, a 2GB memory card, a 2.4GHz remote control transmitter, and the Striker Spy Drone manual.

Considering that the drone’s flight time is not really long, it would be best if it comes with some extra batteries in order to ensure longer flight times. While its parts are difficult to buy on aftermarkets, you can purchase accessories and parts directly from the World Tech Toys website. You may also try other consumer sites, with Amazon being a popular one.

Since this drone comes in at under a $100, you do not really have to expect so much from it. Although it is ready to fly out of the box and comes with an acceptable battery charge, you cannot expect more than 4 minutes of flight time from this quadcopter. Hence, it would best if it comes with an extra set of Striker Spy Drone batter.

Unless it is windy, the drone can prove to be stable. But since it is light, you have to fly with caution when it is quite windy outside. A single strong gust of wind is enough to knock the toy far away.

As for its camera, it is already built in but does not allow a live feed. Meaning, there is no first-person view or FPV capability. And while its camera is reasonable for its price, a great cinematography is not necessarily achievable. But, as mentioned above, you will love the idea of watching videos of your flight.

What Else Can You Tell Us?

If you are the type who prefers a drone with a headless mode, then this is not for you. It does not have such a feature. The interesting part, however, is that World Tech Toys made sure that the drone’s front propellers and guards are colored red. By doing so, you will know exactly where the toy is headed. So, in other words, this somehow answers the need for a headless mode.

Like every cheaper drone out there, the motors on this drone are brushed. In case you did not know, this is the type of motor that is quite cheaper than brushless. While you can be glad about its affordability, keep in mind that there is a downfall – it tends to get hot and, if unintended, it overheats easily.

With all pros and cons considered, the Striker Spy Drone is no way close to a deal breaker. It may not have the most advanced motors out there, but for its price, it is safe to say it is a reasonable toy to own. It would be best, too, if you find and get some spare motors. Again, you can try the likes of Amazon and eBay or, if possible, go directly to the manufacturer’s website. The reason for buying some extras, as the drone’s motors could possibly stop working after a couple of flights.

While there are plenty of drones on the market that can perform better, the Striker Spy Drone is a great steal for a drone that costs a hundred bucks. It may not have superiority in terms of battery life, but the joy it gives at an affordable price is incomparable.