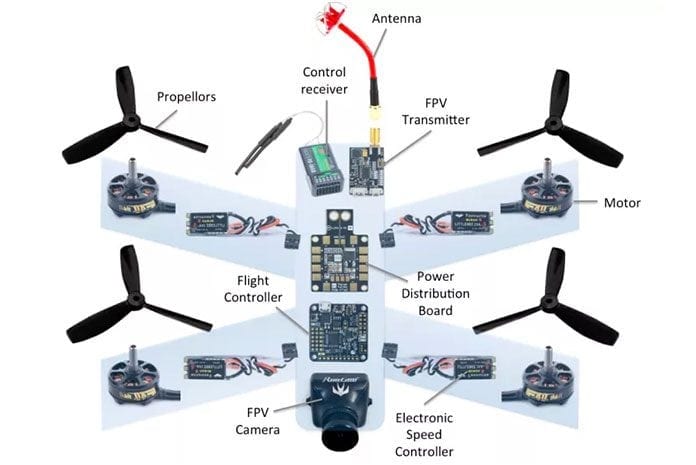 
If you are planning to fly a drone, you must first understand how it is controlled. For an object that seems heavier-than-air to get airborne, there is a need to create “lift.” The latter is basically a force that helps in pushing an object upward into thin air. The way it is created, however, varies greatly by the air pressure both above and below an unmanned aerial vehicle. This is where a drone controller becomes so much important. Regardless of your drone’s features, it will not work without this device.

It holds true that multi-rotors have become unique in the word of RC hobbyists. In most cases, when it comes to the topic of controlling a drone, the pilot has complete and precise control over its motors. A simple nudge of the throttle will immediately translate into a proportional increase in RPM. The same can be said for input in ailerons, rudders, and other parts that affect direction and speed.

Commonly known as FC, a drone flight controller is dubbed the heart of any quadcopter. It is responsible for controlling almost all onboard electrical components, though it requires assistance on an array of parts (e.g. microprocessor, sensors, etc.). In this article, you will learn about the different types of drone controllers and the range of possible feature integrations. That way, you can be confident in choosing the right one for your application.

STM32 F1, F3, F4, and F7 are considered the most common models. In case you are wondering, the higher the number you see besides “F,” the faster its microprocessor is; hence, the functionality is much more interesting.

For any pilot looking to buy a drone flight controller, it is ideal to purchase a model that has either an F4 or F7. That is because these are designed to be fast enough to process the latest FC firmware. Unfortunately, the F1 is looking to be a lot slower these days, especially with the rise of newer ones. It is simply not a recommended buy, as it is expected to become unsupported anytime soon.

F3 boards, on the other hand, have the ability to run the latest FC firmware. The only catch, though, is that their microprocessor is somewhat consequently slower when compared to F4 and F7 in terms of reading and sensor response inputs. The two inputs are known, respectively, as the gyro update frequency and the PID loop frequency.

You might be wondering, “what firmware is this all about?” Basically, the drone controller is connected to a computer via a micro USB in order for it to be flashed with firmware specific to its configurator software. This process is needed in order to program the device for it to work accordingly. The firmware then configures the board with the correct program and settings necessary in managing and controlling the quadcopter.

A general rule of thumb applied to all FCs is to flash them with the latest available firmware. As such, it is possible to improve a drone’s flight characteristics and, at the same time, prevent the possibility of software issues.

It is worth noting that it is possible to flash an FC with firmware for utilization with different configurators, such as Betaflight, Raceflight, or KISS, among others, – if and only if they are compatible. Keep in mind that all of these configurators have specific benefits unique to them. And while their advantages and disadvantages greatly differ from one other, a user’s go-to configuration is merely subjective.

As far as a general recommendation is concerned, it is better to use either KISS or Raceflight, as long as it is either one is compatible. Otherwise, go for Betaflight as it is the most common configurator. This one has an open source nature that greatly offers compatibility with almost all known drone flight controllers today.

A drone flight controller is installed to a UAV frame through the use of four equally-spaced mounting holes. As of now, the standards suggest 30.5mm by 30.5mm spacing between hole diameters, and this one goes to the 220-sized quadcopter.

A common spacing dimension on a 70-30-sized quadcopter is 20mm by 20mm. The mounting holes here differ a bit, as they are usually 3mm in diameter. It is also expected for smaller mounting patterns to exist, but they are usually used for quadcopters with sub 70mm size. Most, if not all, drone controllers are designed to make use of mounting holes that are quite larger than 3mm diameter. This is meant to enable insertion of rubber grommets, which, in turn, help in the isolation of the FC from motor vibration.

As far as connecting external components directly to the drone flight controller is concerned, they can be bought together with pin header holes, plugs, solder pads. Also in most cases, a combination of the three. Solder pads are proven to be the most useful among these items. With their firm compact and preferred connection, it is easy to achieve a clean and low profile, as well as some inclusion of external componentry connections.

Although pin header holes are a thing these days on most drone controllers, hobbyists tend to solder wires directly the holes instead of using a servo plug to solder header pins and connect the wires. Regardless, they are proven to dramatically reduce weight and make the connection of profiles seamless.

As for plugs, they are not really the most prevalent ones in terms of connection method. Nonetheless,  they are capable of enabling external components so they can be disconnected a lot quicker. Because of motor vibrations, soldered wires become fray. Ultimately, they span off from either pin holes or solder pads due to having such quality. There is a workaround here, though. One just needs to hot glue all solder joints, as it is already a safe method of preventing loss of circuitry whenever a flight is made. Solder pad drone flight controllers are still highly recommended for nearly all applications, but it does not mean that the use of connectors is not useful for smaller, tighter, and more modular setups.

This one here is basically a microchip that is secondary to the main processor. It is responsible for sensing the angular velocity or speed at which a drone tries to rotate in the pitch, roll, and yaw axis. Through the use of calculus computations and different gyro inputs, a drone flight controller can be successful in estimating the distance a drone needs to rate, as well as whether its rotation needs to accelerate or decelerate.

Another separate sensor ship, an accelerometer is in charge of detecting the acceleration of a drone in the pitch, roll, or yaw axis. And since the accelerometer is also capable of identifying constant acceleration of gravity, the drone flight controller will able to utilize the data in calculating the drone’s exact angle from the horizon. This is often used for flying drones in the horizon or self-levelling mode. The latter is revered as the only flight mode beginners are recommended to play with.

This is without a doubt the backbone of any drone controller. The PID control loop in software is there to help achieve and maintain stability during flight. It simply stands for three calculus terms called “proportional, integral, and derivative,” which, respectively, mean magnitude, area, and gradient of a curve.

As long as these three gains are tuned accordingly, it is easy to drastically improve the stability of a drone, especially its responsiveness. When a drone is airborne, a quick roll input happens. For instance, it could inform the device to move to a set-point angle from a flat hover. In this type of scenario, the drone would tend to immediately roll at a certain angle, so it can match the stick input.

It should be noted, however, that this is usually not the case. That is because what the drone will do is roll right past, say, 45 degrees and roll left back past the same angle. Regardless of the figures, it will continue to follow a certain pattern.

A PID loop constantly analyzes both the gyro and the accelerometer data. It controls them in such a way that well-tuned loop happens. Meaning, it will appear as if the drone is instantaneously rolling at a certain angle to its right when controlled by a stick input.  Considering how complicated PID tuning is, it would be best to leave this area to experts, especially if a user is unfamiliar with the overall tuning process.

As time passes by, more and more drone flight controllers are equipped with additional features. This makes it possible for users to achieve a neater and simpler drone build. Some of these include the following:

It holds true that a drone flight controller is only perfect for a single flying style, though there are at least three different types. These are namely, Cinema Flying, Sport Flying, and Autonomous Flying. But given the massive number of drone controller brands available on the market, it is really difficult to say which ones are the best. Let’s instead try to give you a perspective on this area.

Always remember that drone flight controllers vary greatly from one to another. Some of them proving to be a quite overwhelming even for the most advanced of users. It is best that you figure out first what you exactly need before even considering the type of drone controller that you will buy. Are you an apprentice, or are you are looking to build one solely for hobby purposes? Do you require a fast or racing style UAV? What field are you in, like photography or videography?

Apart from answering these questions, you will also need to greatly consider your budget. But given the information above, it should be easier now for you to select a drone controller ideal for your own application.

Racing Drones – What is so cool about them?